I often see the requirement that a WLAN site survey and design must be done by the AP-on-a-stick method.  That said, you’ll want to use the same AP for your survey that you will use in production – or one that is similar.

In this case, we are going to convert a lightweight access point to Autonomous, so that we can use it without a WLAN Controller.  The new survey rig is a Cisco 3602i, configured with 5GHz channel 157, set to 40 MHz.

How did we turn the lightweight AP into an Autonomous and do the quick and drity configuration?  The short answer is, we followed Richard McIntosh’s directions.  His blog, and a great “HowTo” is here: https://ciscotophat.wordpress.com/2013/01/05/configuring-a-3602-for-wireless-surveying/  Thanks again, Richard, for putting that out there for everyone to read.

We altered the power output of the new survey rig as sort of an experiment to see how the signal propagated, and where our -67dBm and -85dBm boundaries lie.  Why did I choose those numbers, you ask?  Well, -67dBm happens to be our design requirement for Cisco Voice over Wi-Fi.  The signal degrades as is leaves the AP, and gradually becomes weaker as you get farther away.  The -67 dBm is the “edge” of our cell.  You can think of this as, “the phones should be happy if our signal strength is -67dBm or higher”.  There is a “second cell”, which is the signal that is past the -67dBm edge, and its edge is -85 dBm.  There is a “third cell”, however it is not important, as it does not create any problems for us since it is too weak to cause interference issues.  Let’s talk about that secondary cell.  It isn’t really a second cell, but rather a continuation of the first cell, and we would rather it not be there.  If there is another access point on the same channel, and they both have an area where this secondary cell “overlaps”, they will interfere with each other.  We call this Co-Channel Contention, or CCC.  You’ll hear this also under a different name, Co-Channel Interference.  I prefer CCC, as I think it is a better description of what we are trying to describe.  In this area where the two “secondary cells” overlap, the two access point and client can all hear each other.  This is the problem, because if an AP and client are having a conversation, the other AP will be able to demodulate their conversation, and will not transmit.  Wi-Fi is an extremely polite protocol, and they are not supposed to “talk over one another”.

There’s a great whitepaper from Keith Parsons about this “secondary cell”, in which he calls it the “Don’t want” area.  His whitepaper can be found here.  http://wirelesslanprofessionals.com/wp-content/uploads/2010/01/Want-Dont-Want-Dont-Care.pdf

We are also interested in seeing what power levels were available when the AP is on a particular channel in the 5GHz band.  Access points can support different power levels of “loudness” when on different channels.  When it comes to designing our WLAN, we will base our design off the channels which are our lowest common denominator – meaning we will not use a power level setting that all channels do not support.  More information on power levels can be found on George Stefanick’s blog, which can be found here: http://www.my80211.com/

So, let’s get started!

We setup the AP in the corner room (where the little man is) and mapped out how many rooms we would walk for the entire test.  Each walk is the same, with no other change other than the output power.
Power level 2 dBm, which is lowest setting. Notice the -67 dBm boundary is at the second room.  This is the area we care about.  We’ll follow this graphic with the area all the way through our “second cell”, which is our “don’t want” area.  The grey area in the second graphic will be our “don’t care” area. 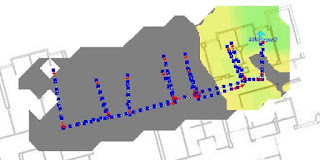 Here’s the area we don’t want (not counting the area from the first graphic, which is our "care"), all the way out to our “don’t care”, which is grey. 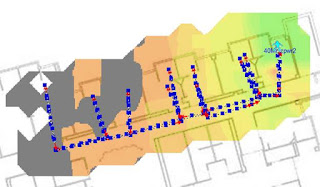 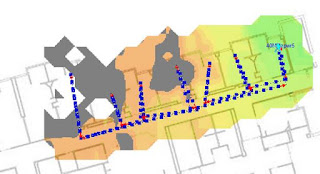 Power level 5dBm, -67 dBm coverage. This is what we want and care about. 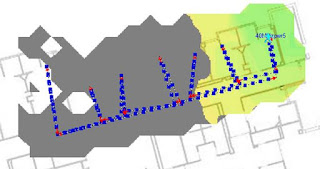 Next, we turn up the volume up a notch.  Power level 8 dBm didn’t change the -85 dBm coverage that much, however the -67 dBm. boundary increased to the third room. 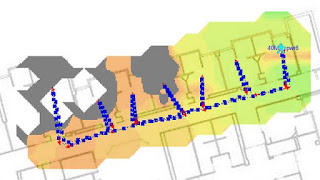 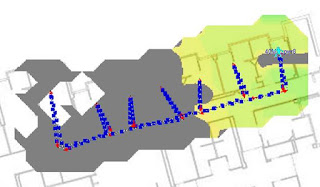 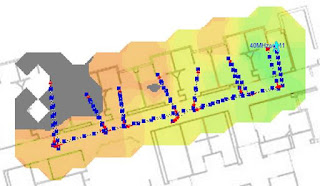 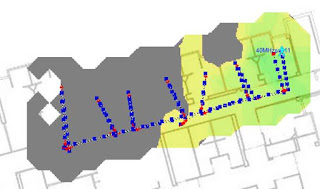 Next was Power level 14 dBm.  Our -85 dBm boundary increased to six rooms.  Just like the previous example at level 11 dBm, the -67 dBm boundary stayed the same – three  rooms. 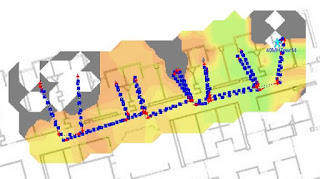 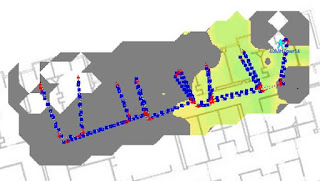 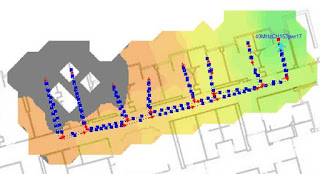 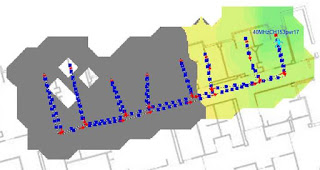 Channel 157 allowed us to turn the power level to 20 dBm.  As you can see, our -85 dBm boundary is six  rooms, and a little of the seventh  room.  The -67 dBm boundary remained at three rooms. 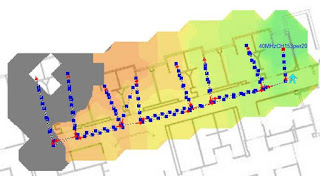 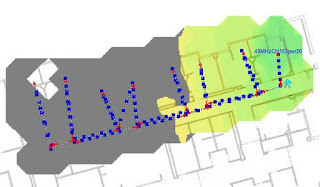 The maximum power level that we could turn up to was power level of 23 dBm.  As you can clearly see, the -85 dBm boundary was 8  rooms!  The -67 dBm boundary remained mostly the same, at three  rooms, and a small portion of the fourth room. 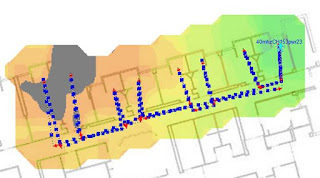 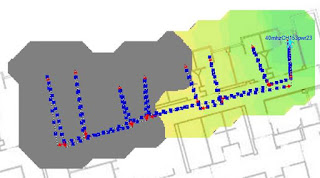 I want to mention design requirements.  You must define your design requirements before you start designing an Enterprise WLAN.  In this case, this is a 5Ghz WLAN design, utilizing four channels of UNII-1, four channels of UNII-2, and four channels of UNII-3.  We’re going to be supporting 40 MHz channels, which equates to six non-overlapping 5GHz channels.  This design in particular is over a half million square feet of 5GHz voice over Wi-Fi coverage, which requires secondary -67 dBm “want” cells available to every portable phone.  That said, six channels of 5 GHz Wi-Fi will get used up quickly, and we want to keep those “don’t want” cells as small as we can!
As usual, feedback and questions are most welcome!
Posted by JustDoWiFi at 7:50 PM