Is there a need for a Spectrum Policy within the Enterprise?

I recently came across this some equipment that interfered with Wi-Fi in the worst way – well, that’s my opinion, and I will let you be the judge.

We’ll first start out with stating the obvious.  The 5GHz UNII bands are license free, which means it is a free-for-all when it comes to who is doing what.  Most of us (the folks reading our blogs) all understand that.  However, when an Enterprise environment has millions and millions of square feet of office, retail, healthcare or manufacturing space, I think the Company’s Enterprise IT department owes it to their internal customers to have a Spectrum Policy to keep the spectrum in check.  Letting the company buy whatever they want, whenever they want, and deploying it randomly as they see fit, doesn’t work well, as you will see if you continue reading.

I recently came across a surgery center consisting of 8+ operating rooms, and the Wi-Fi was at the core of the complaints.  Nurses had to move their mobile workstations outside of the operating rooms in order to maintain a connection.

We went in with protocol analyzers at midnight and saw nothing.  We went in at 6pm, and saw nothing.  Then we went in during working hours with our Spectrum Analyzers, and that is when we saw a big difference!  We observed channel 40, in the 5GHz range, pegged at 90+ percent duty cycle, for well over an hour.

Okay, so what, you think.  One channel – no big deal, right?  Most Enterprises use UNII-1,2 &3, so there is likely another channel readily available at a -67dBm. 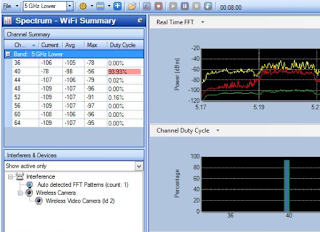 It took us a while to track down the equipment, as we didn’t want to go into an operating room while they were doing their business.  After several days of intermittent troubleshooting, we finally came to the conclusion that our source was mobile.  We tracked it down to Operating Room “towers”, which were mobile Endoscopy equipment.  The gear has a wireless transmitter and a remote monitor or two, and those remote monitors were connected via the 5GHz spectrum.  This equipment was moved around to whichever Operating Room need it.

Then we discovered something else.  When the equipment was turned on, it searched for a channel to use.  Not in a very Wi-Fi friendly way, though.  It seems as if it always starts on channel 36, then works its way around the first eight channels until it finds “home”. 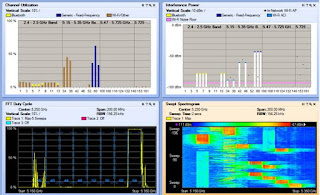 What does this do to your Wi-Fi when this is happening?  If the RED color doesn’t spell it out for you, then nothing will!

Just to prove our point, we took our active survey access point (yes, we actually do “active” site surveys still) and put it on channel 36 and associated three clients with continuous pings to it.  We turned on the Stryker gear, and not only did the pings cease, the three clients no longer saw our site survey SSID, and then decided to join another WLAN on another channel.

In a nutshell, it obliterated the channel for however long it decided to rest there. As you can see from our swept spectrogram, there is no real pattern.

We also used two different spectrum analyzers that we happened to have in our kits that week.  Not saying that one is better than the other, and if we didn’t use one that isn’t here, it isn’t because we don’t like it.  We just happened to have both of these with us, and that’s what we used.

The screenshots below are from just one transmitter and one receiver pair.  Imagine a surgery center with ten operating rooms along with five of these units online, coupled with the different schedules and the appearance of random Wi-Fi issues.  When these units boot up, they search for the channel they want, obliterating the spectrum as they go. 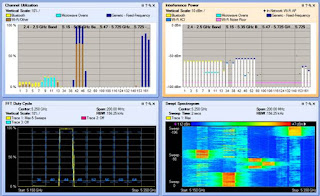 If there was a Spectrum Policy, this kind of thing might be avoided.  The 5GHz bands can be divided up within an Enterprise, with UNII 1,2&3 reserved for Wi-Fi, and UNII-2e further divided up for cameras and other gear.

What are your thoughts?  Is it worth the investment to put together and enforce a Spectrum Policy?